Fraley’s Missa Brevis is a setting of the Latin ordinary mass for unaccompanied mixed voices, so named because of its short length (approximately 17 minutes). A promotional video by the Cascadian Chorale for the concert premiere features a portion of the Agnus Dei at 2:15. There are also Video Scores available for the Kyrie and the Agnus Dei at YouTube.

This page contains many resources: performance notes for the director and choir; comments about the piece by the composer; resources for the performers (recordings to help with between-rehearsal practice). 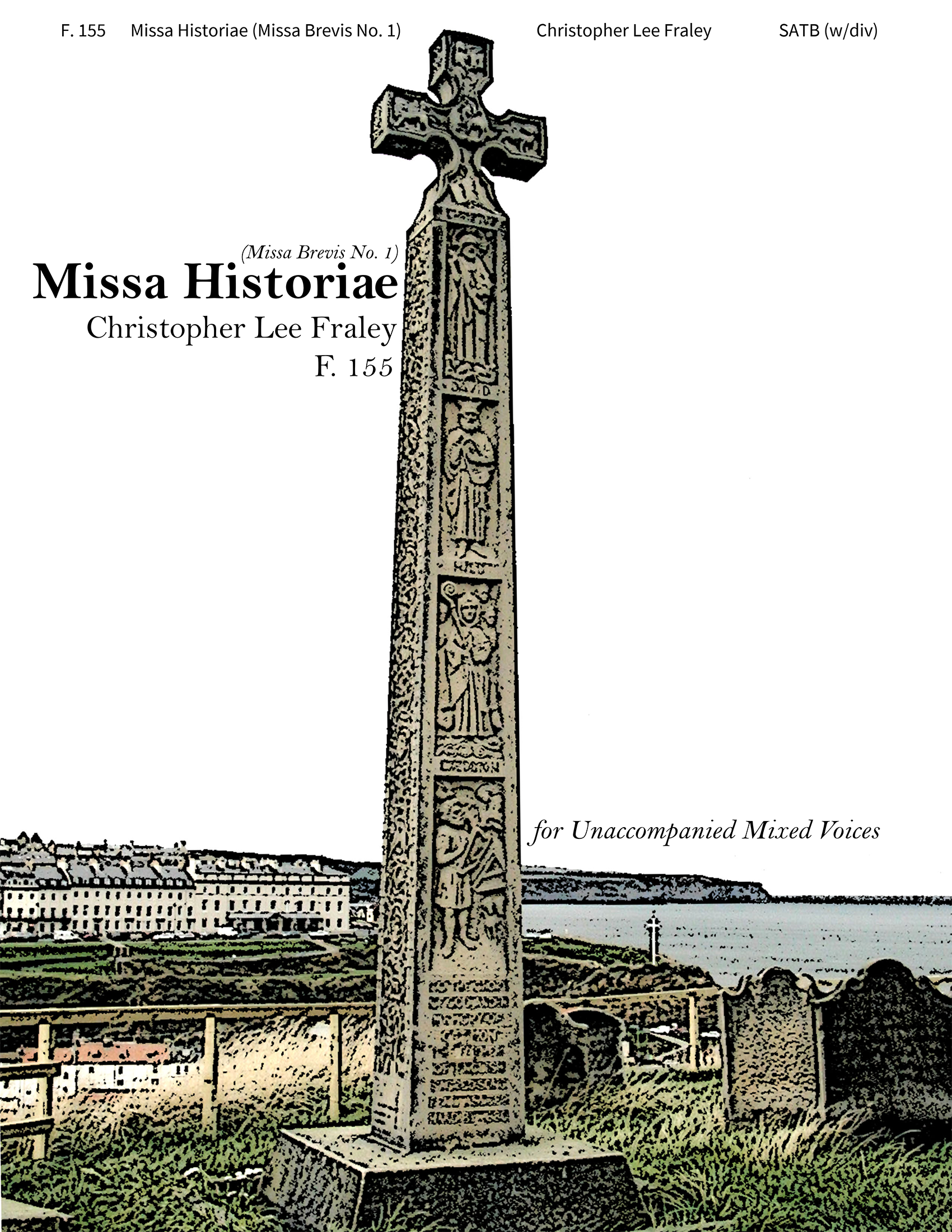 Missa Brevis has a bit of a long history. The earliest portion of it was started in 2002 after I had been working on Yorkminster Lights, an orchestral tone poem which involved a lot of counterpoint. Still being in the mood to write counterpoint, I started a madrigal; but lacking a specific text and ensemble, that project languished. Fast-forward to 2005, I was writing a Good Friday anthem and “resurrected” the madrigal, which I used as the instrumental introduction to the piece In the Shadow of the Son. Being very happy with the results, I thought that was the end—until I needed a quick Kyrie setting, at which point the music finally saw its originally intended instrumentation: voices. This is the version I showed to Cascadian Chorale director Gary D. Cannon who suggested I should continue this work and write an entire a cappella mass setting. About a year later, I freed up enough time to write Missa Brevis over the summer of 2010. The Kyrie of this mass is a slightly extended version of the original “quick” Kyrie setting.

My intent from the start was to write an a cappella setting of the Latin ordinary mass suitable for concert performance, with portions of it still suitable for modern church worship. After studying many comparable settings, I decided to write for a single choir rather than double or antiphonal choirs. Doing so, however, presents some unique challenges in terms of preserving interest and forward momentum (both of which would have been easier if I had used a second choir).

One of my favorite topics is the development of harmony from dronality and chant. I decided to use this progression as a means of keeping the listener interested in the mass, and several movements illustrate this development, as does the mass as a whole. For example, the first movement (Kyrie) illustrates the moderately developed harmony from the 16th Century, while the last movement (Agnus Dei) illustrates the highly developed romantic harmony. Two movements in particular also illustrate this development of harmony in their internal structure. The Gloria starts with a chant (the incipit), which forms the thematic basis of the work. Thus, we first hear the chant unadorned, then rendered in a very simple counterpoint using 4ths and 5ths as the primary intervals, and throughout the movement we encounter several organum-like passages in parallel 4ths and 5ths, with more modern-like treatments appearing towards the end of the movement. The Credo is even more explicit, starting with a unison chant, progressing to chant in parallel 5ths, to chant in parallel major 3rds and 5ths (i.e. parallel major chords), then minor 3rds, then something akin to a major cadence is encountered, then very simple imitation, which becomes more sophisticated, and begins to sound more like modern counterpoint, then modern chords, all while retaining a “core” that is still chant. So while this mass setting is thoroughly modern, it is at the same time thoroughly old.

A second big challenge was setting the Credo. Because the creed has such a long text, it can easily unbalance the other movements of the mass, especially for a short mass (“missa brevis”) where the length of the mass is typically under 30 minutes. Composers often employ creative solutions: the Credo might be divided into multiple movements; or, the words of the different sections of the creed might be overlapped to shorten the length (at the cost of clarity). Ultimately, I devised a solution that retains clarity of the text: I employ an aggressive tempo and a very free use of rhythm while avoiding all but the most essential musical repetitions. I was amazed to find that I could fit the whole Credo into less than 3 minutes!

The Kyrie is a straight-forward motet in ABA form, corresponding to the form of the text. The A sections are from my first Kyrie setting. Adding the contrasting B section (“Christe eleison”), serves many purposes: it adds symmetry to the movement that both balances the movement musically and helps clarify the text; it also adds enough length to keep the Kyrie in balance with the Gloria and the Credo.

The Gloria is more declamatory, which suits the text very well. This declamatory mood is further supported by the movement’s harmonic design, which is based on Pythagorean harmony (based mostly on 5ths and compounds of 5ths), making liberal use of parallel 5ths and 4ths. The Gloria’s length and emphatic style make this movement the spiritual center of the whole mass.

The Gloria is immediately followed by a long, fugal Amen, set as a separate movement (although technically, it is part of the text of the Gloria). Notice how the counterpoint of this movement contrasts with the Kyrie’s 16th Century-based counterpoint—this movement borrows more from 18th Century counterpoint, but its harmonic structure is identical to the Gloria.

The Credo is a highly compact movement—less than three minutes in spite of the long text—that paints the meaning of the text with melody, harmony, and texture.

The Sanctus features an expressive baritone solo, which climaxes in an exuberant “Hosanna!”.

The Agnus Dei is contemplative, built on a harmonic structure that underscores the text. The movement employs AAB as its form, but with some significant twists. Over the course of each “A” section, the music modulates down a whole-step. Thus the second “A” section is identical except for this transposition (and a slight elongation of the melody towards the end). The start of the “B” section at first appears to be another repetition of the “A” section (yet again transposed down a whole step), but the first phrase does not resolve the way we expect, creating a tension that resolves via a modulation into F Major once we reach the text “dona nobis pacem” (“grant us peace”). Thus, the handling of the harmonic tension not only creates a compelling and satisfying musical experience, but also directly reflects the text.

Wikipedia provides a translation of the Latin mass text, as well as a broad history of setting the mass text to music.

The mass is approximately 17 to 20 minutes long: (all durations are approximate)

To help choirs prepare, here are several recordings of Missa Brevis. Please note that your director will likely choose different tempos, and conduct tempo changes differently than on these recordings. These recordings are not authoritative, but rather are a useful aid for learning notes and for getting a feel for the piece. As always, keep one eye up and follow your director!

Note that in some of these recordings (i.e. the Soprano only, Alto only, etc.), long rests are shortened to about 3 seconds.

Please note that these recordings are protected by copyright—please do not post them to other web sites, and if you wish to link to these recordings, please link to this page, not directly to the MP3 file. If you’ve purchased an adequate number of octavos for your group, you may burn an audio CD with the relevant tracks for your members to use in preparing the music.

NOTE: These files were updated 19-Aug-2011 to refect changes made to very beginning of the Credo (mm. 1-3) and the ending of the Sanctus (mm. 58-61). These recordings now match version D8, and thus no longer refect the older version C4e.

Listen to Missa Brevis while viewing the perusal score:

Copyright © 2010 – 2021 by Fraley Music, Inc.
Please note that all content on this web site is protected by copyright.
All Rights Reserved.